Questioning the myth of plastic knives and boxcutters. "This fictoid serves to divert public attentions from the responsibility, and legal liability, of the government and airlines to prevent major weapons — such as guns, bombs, chemical sprays and hunting knives [all of which were mentioned in flight attendant and passenger cell phone calls] from being carried aboard airplanes. If such illegal devices had been smuggled aboard the planes, the liability could amount to billions of dollars. If, on the other hand, it could be disseminated that the hijackers had only used plastic knives, such as those provided by the airlines for meals, or box cutters, which were allowed on planes, neither the airlines, the screeners at the airport, or the FAA, which regulates the safety of airports, could be held legally responsible."
posted by fotzepolitic (7 comments total)
Anything can be lethal in the hands of a sufficiently trained person. To my karate teacher, a 6th level black-belt, any normal room or office contained approximately a thousand lethal objects. He stunned the arms of a student (temporarily, of course... no harm) with a bic pen.

Now, I doubt that these guys were that well-trained. But a lot could be done with even a box-cutter... and I won't even go into supersharp glass or stone knives, or even polycarbonate guns that wouldn't show up on any metal detector.

Why would they risk trying to smuggle something illegal, when they could have the same effect with something legal? Remember that they only had one shot at this, because this attack will never work again (after all, it didn't even work for the fourth plane).
posted by electro at 10:21 AM on May 31, 2002

Wow. He really knows how to twist words. Maybe he and Ari should duke it out some day...

Not a scintilla of evidence had been found then— or to date— that either plastic knives or box cutters were used by any of the ten hijackers who crashed United Airlines flight 175 and American Airlines Flight 11 into the World Trade Center.

He knows full well that that will be misconstrued to mean that there were no box cutters used at all and that people will gloss over the evidence of box cutters...

On flight 77, which crashed into the Pentagon, one single passenger, Barbara Olsen, reported on weapons that some of the five hijackers had in the back of the plane. She told her husband, Theodore Olsen, on a cell phone that the hijackers who herded her and other the passengers into the back of the plane had two kind of weapons: knives and cardboard cutters (presumably box cutters).

This he dismisses out of hand because "it cannot be assumed that all the hijackers on the plane had similar weapons. The hijackers assaulting the cockpit might have needed more sophisticated weaponry to rapidly stun or kill the pilots"


I thought much the same thing, stefanie. The "fact" that only one passenger on one plane mentioned box cutters doesn't tend to prove that there must have been other weapons on the other three planes. In fact, it tends to prove the opposite - that box cutters were the weapons used on the other three planes, but they just weren't mentioned by any of the passengers making cell phone calls on those three.

Similarly, on the "need" for more sophisticated weaponry to subdue the pilots and take control of the planes, I do not have any problem with the official explanation: that since it was still being assumed on each plane that what was happening was an "ordinary" hijacking, the protocol, once passengers were injured or killed, was to surrender control and wait for negotiations to commence, in order to prevent further loss of life.

I'm all for a good conspiracy theory, especially when heavy fingers can be pointed at Rumsfield, Ari, et al, but this one is pretty weak.
posted by yhbc at 11:02 AM on May 31, 2002

Have any of you folks ever wielded a box-cutter? As a former stockboy at the Piggly-Wiggly, I can tell you that box cutters slash really well, but they're pretty awkward for stabbing. To be incapacitatingly lethal, they'd have to be used on the throat, and from behind. Stabbing, they'd only inflict a wound half an inch deep, and would have trouble making it through clothing. The idea of a plastic knife such as the ones given out with meal service penetrating clothing is laughable.

That being said, I don't think this is a liability-inspired conspiracy so much as a meme grown out of control. "And those super-criminal masterminds imagined something so evil we couldn't think of the possibility, and then pulled it off using implements we thought were harmless!"
posted by chino at 3:14 PM on May 31, 2002 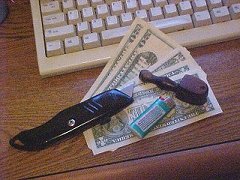