Reading the 9th Prophecy of the American Hopi Indians has sent a chill in my spine!
November 10, 2002 2:30 AM   Subscribe

Reading the 9th Prophecy of the American Hopi Indians has sent a chill in my spine! Some interpretations I have read say that this prophecy is an interpretation of Nasa's Skylab falling back to Earth circa 1979. However when I read this prophecy a few months ago the crash of the World Trade Center immediately popped into my mind! The Hopi's 9th prophecy states "You will hear of a dwelling-place in the heavens, above the earth, that shall fall with a great crash! It will appear as a blue star." "These are the Signs that great destruction is here: The world shall rock to and fro. The white man will battle people in other lands - those who possessed the first light of wisdom. " Is this not our time?
posted by thedailygrowl (42 comments total)
seems specious
posted by cadastral at 2:44 AM on November 10, 2002

I'd like to point out at this stage that the Mayans cited 22 December 2012 as the end of the next phase of civilisation on Earth, when the crusts will shift due to a realignment of the magnetic poles (well, that's one of the interpretations).

Is "dwelling place" a reference to the plane or the towers? It doesn't really fit either way. Nor does the blue star. Something like "Flying iron, filled with voices, will crash from the sky. Dwellings taller than pine trees will fall down. Many people die." and I'd be really scared.

Given that I was really waiting for the King of Terror in 1999, but managed somehow to miss it, my expectations for 2012 are rather low. Prophecies without exact dates seem much more likely to become fulfilled.
posted by ikalliom at 3:26 AM on November 10, 2002

Here are my two my prophecies:

1. There will be a resounding, blasting whimper from the multiple screens representing humanity whose predominant color is not really sky blue, but a kind of anemic cobalt or indecisive ultramarine.

2. Two great constellations shall appear: the thousand-tiered ice chandelier of mercury-like inconsistency; and the headdress of mystery objects the resemble fruit only symbolically.
posted by hama7 at 4:30 AM on November 10, 2002

boneybaloney, the Mayan calendar is also considered to be a "stellar clock" derived from astronomical transit. The calendar ends in 2012, as that's when the clock "resets itself".

As for the earthquakes, our moon is partly responsible, as its mass affects rotation, tidal flow and to a limited extent, plate tectonics.
posted by Smart Dalek at 4:56 AM on November 10, 2002

Hell, there must be a better prophecy of the 9-11 crashes out there than that!

Surely we can find some vague drivel by Nostradamus that doesn't include mentions of stars and dwelling-places.
posted by lambchops at 5:16 AM on November 10, 2002

Seems similar in form to most messianic prophecies. They all appear to prey on the meme that "things are getting worse", to some degree or another.
posted by walrus at 6:19 AM on November 10, 2002

ps that link isn't anything to do with me ... just a quickly googled summary of messianic prophecies
posted by walrus at 6:21 AM on November 10, 2002

Even though I once lived in California, I would advise you to find other sources than Ellie's Crystal Links for this story.
posted by RJ Reynolds at 6:30 AM on November 10, 2002

Without prophecy of doom, people will think they have a lot longer to get into the preferred after-life of their belief structure. With the prophecies, people work hard now, not knowing whether they could be dead tomorrow, and not have enough points, and their vengeful god, neverminding the fact that they didn't have enough time to do their task on earth, will cast them into some pit for eternity.

God is vengeful, after all. Right? I mean, that's what they tell us. The world may end tomorrow, so get your god points now. Don't forget to tithe your church, or god won't let you in. What? What if the world doesn't end tomorrow? Well then, God will still appreciate your tithe.

The heavens will fall, night will become day, and chicken little will run around with his head cut off. (Because that's what chickens do, they run around when their heads are cut off.)

One of these days, the Earth will run out of resources, or the sun will explode, or something else will happen. But it won't be for a long, long time. After all, if the Earth wasn't going to end in 1000 years, how could scientists get money to study their findings, and buy a porsche at the same time.
posted by benjh at 7:29 AM on November 10, 2002

You've got to be kidding, thedailygrowl. Ancient prophecies predicted the WTC bombing? What was it that made you think this was worth posting to the front page? FWIW, the site also notes that "drawings of the Ant People [of Hopi legend] are remarkable [sic] similar to the Grey aliens of today."

On the off chance this thread can be saved, here's a retelling of the Ant People myth minus the X-Files stuff, and here's an interesting page from the official Hopi Tribe site about cultural theft and misrepresentation related to Hopi spirituality.
posted by mediareport at 7:35 AM on November 10, 2002

Synchronicity, growl! I started reading up on the Hopi prophecies about a month ago, when someone casually mentioned them on an Email list I'm on. I enjoy reading them.

I'm secretly hoping for some kind of new age...
whilst the less ambitious among us are just hoping for some food and sex...
*rim shot*
posted by quonsar at 8:48 AM on November 10, 2002

Anything with lots of explosions can usually be tied in with some endtimes prophecy.

Is this not our time?

Um . . . . . no. It is a freaking prophecy written by a bunch of people who died a long time ago. They made it up. I hate to break it to you, but prophecies are bullsh*t.

If you want to rescue this thread, go here. At least these people have their heads on straight!
posted by josh at 9:56 AM on November 10, 2002

I think it's time for a new axiom (with apologies to Arthur C. Clarke):

Any sufficiently lengthy hallucination is indistinguishable from prophecy.
posted by staggernation at 10:19 AM on November 10, 2002

I would advise you to find other sources than Ellie's Crystal Links for this story.

(Mark this moment by the way, as everyone on earth is now officially an "HTML Programmer"). And the illustration of how to "think outside of the box" is priceless: 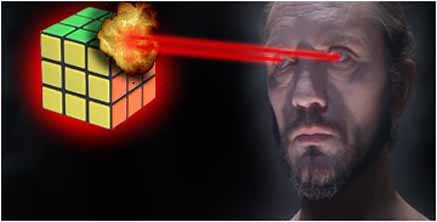 My own favorite prophecies, however, come from the Boomer Bible. To quote from the book of Pspeciastes (the Prognosticator):
(From SPEC 3)
17. Eighty-Four is the number of nightmares to come, and screams at the end of the night, when the crystal ship drowns in its brave new world, and a locus called Kain unleashes the Raptor.
18. And I have counted these numbers again and again, and their sum is inanity, precisely, with nothing left over.
(SPEC 4)
1. Let us hear the conclusion of the whole matter: Fear the Wise, and remain distant from them, for they are inane, and their Names and Numbers will consume you with inanity.
2. Let this be your only consolation: all things come to an end, and after the end there is a silence which consumes all, even inanity."
posted by MidasMulligan at 10:19 AM on November 10, 2002

Well, this is the internet.. anyone can say anything, and I celebrate that. I will say nothing for I have nothing productive to say on this matter.
posted by chrid at 11:51 AM on November 10, 2002

Is this not our time?

Yet, in a circular argument, one could say that at the times these references to past prophecies of doom appear, the Zeitgeist is without hope in dealing with reality, and falls back for intellectual support on peculiarly twisted references to fantasy.
posted by semmi at 12:34 PM on November 10, 2002


Oof! I guess history
does repeat itself.

Interesting that all the earlier prophecies are interpreted to be referring to long-term change, most of which could be positive or negative (railroads, telephones, electricity, highways etc), most generally positive for the incoming white man and negative for the traditional tribal life. # 9 then referring to a disaster in the white man's world seems odd. I'd bet the whole list was made after the fact though - the land overrun with spinning wheels with voices? Snakes of iron across the country? Unless someone can verify that these are from pre-columbian times (which is probably not even theoretically possible since I don't think the Hopi recorded their history) my guess is someone came up with those 'prophecies' in the sixties...
posted by mdn at 2:48 PM on November 10, 2002

O snarky ones, be forewarned. All signs point to one terrible conclusion: George W. Bush is the AntiChrist and the avatar of evil who shall bring on the End of Days
posted by troutfishing at 2:49 PM on November 10, 2002

Screw ancient prophecies. I'm worried about a really big asteroid smacking into us.
posted by alumshubby at 4:17 PM on November 10, 2002

mediareport, those links you provided seem strangely prophetic!
'This was when the trouble started. ... More and more they began to trade for things they didn't need, and the more goods they got, the more they wanted.

This was very serious, for they did not realize they were drawing away, step by step, from the good life given them. They just forgot to sing joyful praises to the Creator, and soon began to sing praises to the goods they bartered and stored. Before long it happened as it had to happen. The people began to quarrel and fight, and then wars between the villages began.'

'...the Twins, Pöqánghoya and Palöngawhoya, ... leave their posts at the north and south ends of the world's axis, where they were stationed to keep the earth properly rotating.'
eh, donkeymon!
posted by asok at 4:30 PM on November 10, 2002

My own favorite prophecies, however, come from the Boomer Bible.

In the picture MidasMulligan posted above, is that General Zod (or whatever his name was) from Superman?
posted by Witty at 5:21 AM on November 11, 2002

I thought it was Laser Beam Eyes Jesus.

Just a late comment, a bit of an interesting tidbit and a link:

According to Cheyenne tradition, there was once a prophet named Sweet Medicine who taught his people how to conduct themselves. He set up a council of 44 chiefs to speak for all the Cheyenne, and presented them with four Sacred Arrows, two to subdue their human enemies, two to make the buffalo fall before them.

And he brought them a warning: strangers called "Earth Men" would one day appear among them, light-skinned, speaking an unknown tongue. And with them would come a strange animal that would change the Cheyenne way of life -- and that of every other Indian people -- forever.