BIPOC MeFites, we'd like your input on starting a BIPOC advisory board; all Mefites are welcome to join the recent anti-racism discussions

The peace movement that marches this day includes the extraordinary people of Peaceful Tomorrows, "an advocacy organization founded by family members of September Eleventh victims. Its mission is to seek effective nonviolent responses to terrorism, and identify a commonality with all people similarly affected by violence throughout the world. By conscientiously exploring peaceful options in our search for justice, we choose to spare additional innocent families the suffering that we have already experienced—as well as to break the endless cycle of violence and retaliation engendered by war."
posted by fold_and_mutilate (26 comments total)
this is real courage.
posted by aiq at 4:36 AM on February 15, 2003

heres a quick summary of the argument for war. is this all they got? nytimeslink
posted by specialk420 at 7:56 AM on February 15, 2003

A course we actually followed during the 90's. Leading to Saddam rearming, the Taliban rising to pwoer, North Korea accepting billions in aid for not building WMD (and then building them anyway), and one or two minor massacres in Africa.

Everyone would love it if war and weaponry was no more. But it doesn't take "courage" to talk. Nor does talking always produce a better world.
posted by MidasMulligan at 7:56 AM on February 15, 2003

"we choose to spare additional innocent families the suffering that we have already experienced—as well as to break the endless cycle of violence and retaliation engendered by terrorism."

Can't we just cut the crap?

You know, call me crazy, but there is a middle ground between "war-always-bad" total pacifism and "kill-em-all let god sort 'em out" war mongering. It's talking each indvidual instance as just that-an individual instance. Sometimes war is justified. This ain't one of those times you ask me. Yes, saddam is a miserable despotic bag of shit, but so are a lot of world leaders. And if you showed me proof that he was involved in 9/11, I'd say fine take him out, but that hasn't been shown.

Although sometimes, when I see the level of debate surrounding this, I sometimes wonder if being bombed back into the stone age might not be the best thing for the world. Least we could start over.
posted by jonmc at 9:04 AM on February 15, 2003

Please jonmc, stop making so much sense! Instead of cooler heads prevailing, what we need is romantic, misty-eyed notions of men of all creed holding hands under a rainbow and singing songs with the warmongers, not any of this sensible balanced non-partisan thinking! Shame on you.

yes, great comment jonmc. why is it that those who hold the most extreme views ('iraq is bad, let's wipe 'em out' vs. 'war is bad, let's make love') are the ones who get all the media coverage? oh ... nevermind. it's just like anything else: sensationalism sells. let's just hope that the people whose voices aren't as loud and who have a more balanced view win in the end. or, like you said, maybe we'd be much better off carrying sticks and stones.
posted by poopy at 9:49 AM on February 15, 2003

A course we actually followed during the 90's. Leading to Saddam rearming, the Taliban rising to [power]...

Err, yeah, the US gov't and CIA had nothing to do with the Taliban rising to being put in power. It was mostly just that damned pacifism...
posted by Shane at 1:04 PM on February 15, 2003

Hold on a second, here. As anyone who’s ever been in a confrontation knows, talking honestly about real problems does take courage. And fixing the problems fairly takes much more courage, and patience, effort, funds, sacrifice, and commitment; and if the US (and other countries, but particularly the US nowadays) would make its commitment to global humanitarianism instead of expedient self-interest, the world would look different. No matter how bad Hussein is, how can anyone doubt that the reason Bush has singled him out for destruction is to make the world better for the US in the manner most convenient to the US?

As today’s protests & this post have shown, millions of people not only disagree that such an aim is worth the expense Bush has in mind, but they’re willing to do something about it. I’m with Mr. Palladini: "You don't fight terrorism with a preventive war," said Tommaso Palladini, 56, who traveled from Milan to Rome [to march with as many as 2,000,000 Italians]. "You fight terrorism by creating more justice in the world."
posted by win_k at 4:14 PM on February 15, 2003

I overstated the “how can anyone doubt” bit. Israeli security will be improved, too. And I meant commitment to global humanitarianism (contrast those costs with the cost of an Iraq war). But that commitment is something the US seems to lack.
posted by win_k at 4:35 PM on February 15, 2003

"the US gov't and CIA had nothing to do with the Taliban being put in power. It was mostly just that damned pacifism..."

Care to show any examples of where the US government helped the Taliban (specifically the Taliban, not the Mujaheedan) rise to power in Afghanistan in 1996?
posted by RobbieFal at 4:48 PM on February 15, 2003

i heard tony blair say today that there is a moral case for war, based on the brutal oppression by Saddam of his own people, flouting of the UN, and his pursuit of WMD.

why is there only one name of this moral list?

I don't have to believe, mistakenly, that the leader of the target country is innocent. blair & bush must convince the security council, their allies and their electorates that the target country fits some acceptable criteria, and is NOT being singled out for attack for some geo-political, economic or personal reasons. they then must show that this set of criteria will be applied without favour across the board.

something tells me, that they cannot do this.

the anti-war stance, being one which conserves human life, is at least as moral a case as the war case, which is partial, prejudiced and suspected of ulterior motives.

my wish is that the UN Inspectors remain, as they desire, to complete their task. for as long as the Security Council is divided, a resolution to bring them back will fail.

in that case, the US will not attack, the UK (whose PM is shown as increasingly out of touch with opinion on the streets, his previous forte) will not provide a fig-leaf, and Saddam will not - as he hasn't for 12 years - invade, gas, bomb or bully his (currently calm) neighbours (for fear of overwhelming retaliation by a trigger-happy world).

I break my self-imposed moratorium on iraq posts today, as a one-time special: I was in an extraordinary crowd of about 1 million today, and feel optimistic that we will be heard.

and that blair can feel the chill of a well-informed democratic wind up his jacksy.
posted by dash_slot- at 4:56 PM on February 15, 2003

>I sometimes wonder if being bombed back into the stone age might not be the best thing for the world. Least we could start over.

i also wonder if, given the weapons, the stone age would be the appropriate reference point...


No matter how bad Hussein is, how can anyone doubt that the reason Bush has singled him out for destruction is to make the world better for the US in the manner most convenient to the US?

As opposed to the French, Chinese, and Russians - to whom the world will be a better place if a brutal dictator is left in power, and economic sanctions are lifted ... thus triggering the benefits of the oil contracts each of these "peace loving" countries has signed with him.
posted by MidasMulligan at 5:06 PM on February 15, 2003

Care to show any examples of where the US government helped the Taliban (specifically the Taliban, not the Mujaheedan) rise to power in Afghanistan in 1996?

I'm not going to split hairs on definitions or specifics. But I know you will assert a link between Osama and the Taliban, and you can't have it both ways. A half dozen-keywords and a Google search will easily bring you to ideas like this, from the Economist magazine 15 Sept 2001 (not exactly "left-wing tree-huggers"):

[US] own policies in Afghanistan a decade and more ago helped to create both Osama Bin Laden and the fundamentalist Taliban regime that shelters him...
The notion of jihad, or holy war, had almost ceased to exist in the Muslim world after the tenth century until it was revived, with American encouragement, to fire an international pan-Islamic movement after the Soviet invasion of Afghanistan in 1979...
Mr bin Laden fought against the Russians on the side of the ISI's favourite Afghan, Gulbuddin Hikmatyar, whose Hezb-e-Islami party became the largest recipient of CIA money...


It's premium (pay) content on the Economist website, but you can find bits and pieces of the article (and many others in more depth) on the web.

Osama, the Saudis, the CIA, the Taliban...What do you want, a road map to cross the street, too? But, we're somewhat off-topic in this thread and, like I said, I'm not going to split hairs, especially with RobbieFal, whose mind I suspect is already closed on the matter.

Er, no, NY Times says, as could have been predicted, "somewhere in between." Read your own link:

The police commissioner, Raymond W. Kelly, put the crowd at about 100,000, while the organizers said 400,000 people attended. Given the sea of faces extending more than a mile up First Avenue and the ancillary crowds that were prevented from joining them, it seemed that something in between was probable.

I wouldn't dream of making an estimate, but there were a hell of a lot of people there. I was stuck for an hour on Second Ave. between 52nd and 53rd (taking refuge in a liquor store for part of the time), and I never got anywhere near what was supposed to be the main protest area. The cops very efficiently segmented the crowd, draining much of the life from the protest (as I write, I am looking at CNN coverage of the European marches, which were much less fettered). Oh, and I did see people holding "I worked at the World Trade Center" signs; I have my doubts whether all of them did, however.
posted by languagehat at 8:03 PM on February 15, 2003

If you refer to the Agreed Framework, please note it was gutted and scuttled immediately by the Republican House: The US broke the agreement first. Whatever their original intentions, the North Koreans perceived quite correctly they were getting screwed.

Also, the Clinton adminstration approach to North Korea will be followed by the present Bush administration for the simple reason there is nothing else they can do. Well, other than totally screw up and start a devastating war, which is quite possible.

one or two minor massacres in Africa.

True: the Clinton adminstration, humbled by thier experience in Somalia--inherited from the outgoing Bush administration--lack the will due the inattention of the American populace and an actively, rabidly hostile Republican House.

However, the rebuttal in two words: Bosnia, Kosovo.

Both of which Bush (43) originally wanted to bail on--even though, as with Saddam Hussein's retention of power after the Gulf War, so can the breakup of the former Yugoslavia be laid to the malign neglect of the first Bush administration.
posted by y2karl at 8:15 PM on February 15, 2003 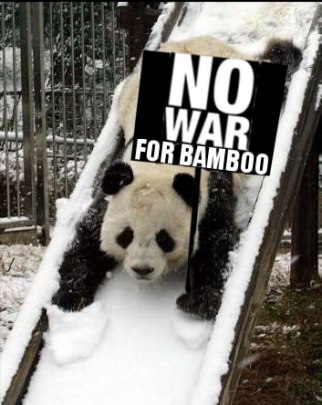