All that was left was a bunch of broken eggs and furr from a really large rabbit
April 8, 2004 9:35 PM   Subscribe

Those crazy christians, look what they'v done now. Beating down the Easter Bunny in front of children... THATS NOT RIGHT! I post this because I found it amusing. I am a proud follower of Jesus Christ... but please dont confuse me with these people.
posted by Recockulous (42 comments total)
Normally I don't comment on threads about religious nuttiness, but this one made me giggle. I want this show at the next Fringe Festival - and only the original cast will do!
posted by Salmonberry at 9:47 PM on April 8, 2004

I live 1 minute from Glassport, PA, and have seen football games in that stadium. Very surprised to see that little town propelled into the blogsphere, the "Most Ridiculous Item" on O'Reilly, and the #1 story on Countdown on MSNBC. The jokes have been constant at my high school, so glad to be a Senior.
posted by ALongDecember at 9:59 PM on April 8, 2004

I am glad that there are some God fearing folk out there who aren't afraid to remind us that Christians can lay a serious smackdown on a non-believer if they're into furries.
posted by Joey Michaels at 10:11 PM on April 8, 2004

And we wonder why people think Jesus believers are whacked! I too am a humble follower of Christ (duh! what gave that away?) and learned a simple rule...if someone is accurately representing Christ they will imitate Him (love, gentleness, forgiveness, serve people)...not hang a brutal beating on a furry rodent! I feel for the parents that have to explain it to the kids... :)

Happy Easter everyone! Remember the reason for the season!
posted by ChristFollower at 10:37 PM on April 8, 2004

I have to agree with those Christian folk on this one. I hate that fucking Easter Bunny. He only got what was coming to him.

"We wanted to convey that Easter is not just about the Easter bunny, it is about Jesus Christ," Bickerton said.

snarfodox, i fear the problem festers a bit deeper than most beleive. 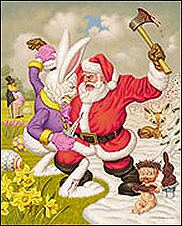 Dude, wake up: it's a secular vacation involving chocolate.

Everyone with any sense knows that both Easter and Christmas are really co-opted pagan festivals: the Spring festival (celebrating new life) and the Winter festival. Well, I hope they do, anyway.
posted by reklaw at 2:28 AM on April 9, 2004

Y'know, as an atheist I'm drawn in admiration to the virtues which on paper, the Christian faith is supposed to epitomise: charity, humility, justice, temperance, fortitude, etc.

Ironic that these qualities seem to be found to an inversely proportionate when set against the populism of the congregation in question.
posted by dmt at 3:36 AM on April 9, 2004

And Cupid better watch his little fairy ass too or I'll nail it to the wall!
[/snark]

Aren't Easter eggs and bunnies signs of fertility? Are these folks guilty of the federal crime of murdering fetuses?
posted by nofundy at 4:33 AM on April 9, 2004


nofundy, you remind me of P.J. O'Rourke's quip: "If meat is murder, are eggs rape?"

I'd give my left nut to see this mishmash of alleged family entertainment. If they wanted to make the point that the season isn't really about the Easter Bunny but about Jesus' death and resurrection, I can think of other ways to do it, preferably without upsetting young children.

(Disclaimer: Christianity is really a religion for adults. Children don't grok sacrifice very well, let alone more advanced concepts like salvation through grace.)
posted by alumshubby at 4:40 AM on April 9, 2004

Maybe Evangelical Christianity is for adults... but JC can easily be explained to kids.

Its a good test of a religious perspective that it can be explained to children.
posted by ewkpates at 4:52 AM on April 9, 2004

Of all the Pagan symbols created by Satan to steal the True Christian History of religious holidays, none save Santa Claus is more dangerous than the Easter Bunny. Painted pagan eggs, Easter baskets and yellow marshmallow chickens don't hold a candle to this furry four-legged demonic spawn, forged in the fires of Hell by Lucifer himself, for the sole purpose of distracting innocent little snow-white children from the true meaning behind Easter Sunday.
posted by verstegan at 4:58 AM on April 9, 2004

Dudes, it's just another variation of showbusiness. For some reason somebody thinks showing a blooddrenched Christ is educational, and beating a bunny is educational as well. I mean idiots sometime are in showbusiness as well.

There's no need to re-enact and make millions out of it or to beat a defenseless bunny : show real war pictures (any war) that is as bad or worse then a crucifixion.
posted by elpapacito at 5:16 AM on April 9, 2004

This rather expands the definition of an "all-ages" show now, doesn't it.

But - hey folks - it's a cruel, violent, bizarre world out there. The sooner young children are acclimated to this, the better. America's kids will have an awful lot of fighting to do in their time and - as has been recently demonstrated in several African conflicts - fairly young children can wield automatic weapons.

We must all work together, as a nation, to toughen up our "little Christian warriors".

' "The program was for all ages, not just the kids. We wanted to convey that Easter is not just about the Easter bunny, it is about Jesus Christ," Bickerton said.

Performers broke eggs meant for an Easter egg hunt and also portrayed a drunken man and a self-mutilating woman, said Jennifer Norelli-Burke, another parent who saw the show in Glassport, a community about 10 miles southeast of Pittsburgh.
"It was very disturbing," Norelli-Burke said. "I could not believe what I saw. It wasn't anything I was expecting." '

I always thought Easter was a graft of a Christian holiday onto some sort of Pre-Christian fertility ritual. But apparently, Easter also features drunkeness and self mutilation - though it's not clear as to which traditions (pre or post Christian) these ritualistic observances belong.

But it's clear to this observer that Pastor Bickerton has tactlessly shoved her previously privately held beliefs now into the public realm - obviously, Bickerton believes that Easter is about whipping bunnies. She might even be initiating a dark plan to supplant Jesus...by a rabbit!

So, let us ask : what do rabbits do? The answer is starkly plain. Rabbits breed with abandon, live for the moment, and are pacifistic, lilly-livered cowards who run from danger rather than taking a stand. So there you have it. Bickerton is pushing her pacifistic, undisciplined, amoral, sex crazed agenda - it could even be communist, I suspect - on America's youth.

All I can say is, I'm very much looking forward to my traditional rabbit dinner on Sunday.
posted by nickmark at 7:37 AM on April 9, 2004

"In Bohemia, Christ was honored on Friday through Sun's Day, and then on Moon's Day they carried his Pagan rival, the Lord of Death, out and threw him into the water while singing:

Death swims in the water, spring comes to visit us, with eggs that are red, with yellow pancakes, we carried Death out of the village, we are carrying Summer into the village."

Where did the pancakes come from, I wonder.....is this the earliest known historical mention of a nascent pancake tradition which has risen to it's fullest and puffiest glory on Metafilter ?
posted by troutfishing at 7:41 AM on April 9, 2004

Trout, congratulations, you win a pancake for spotting it!
and another one for your earlier comment, sex crazed agenda, brilliant.
posted by dabitch at 8:44 AM on April 9, 2004

Everyone with any sense knows that both Easter and Christmas are really co-opted pagan festivals: the Spring festival (celebrating new life) and the Winter festival. Well, I hope they do, anyway.

Actually, Easter is really co-opted Jewish Passover. That's why non-English-speaking Christians generally call this Sunday's holiday "Pascha." But, yeah, as Slate.com explains, German immigrants brought the whole Easter Bunny thing to the US, as it was associated with pre-Christian German folklore.
posted by deanc at 8:56 AM on April 9, 2004

A youth pastor. Somehow that explains it all.
(You Christians with "Contemporary PoMo Youth Pastor" experience know what I mean. ;)
posted by brownpau at 9:08 AM on April 9, 2004

People who attended Saturday's show at Glassport's memorial stadium quoted performers as saying, "There is no Easter bunny,"
Is there an Easter grinch?
posted by thomcatspike at 9:56 AM on April 9, 2004

Can someone please embroider this on a pillow and mail it to the White House? Thanks!
posted by anastasiav at 10:17 AM on April 9, 2004

"The program was for all ages, not just the kids."

But, yeah, as Slate.com explains, German immigrants brought the whole Easter Bunny thing to the US, as it was associated with pre-Christian German folklore.

interesting how christmas as we celebrate it in America is also mostly German. Tannenbaum, Father Christmas, etc.
posted by Miles Long at 10:21 AM on April 9, 2004

Am I alone in finding this the funnist line in the article?

Easter is when the stone is rolled away from the Tomb and our blessed Savior emerges...and if He sees His shadow, we get six more weeks of Lent.
posted by alumshubby at 8:19 PM on April 9, 2004