The War They Wanted, The Lies They Needed. "The Bush administration invaded Iraq claiming Saddam Hussein had tried to buy yellowcake uranium in Niger. As much of Washington knew, and the world soon learned, the charge was false. Worse, it appears to have been the cornerstone of a highly successful 'black propaganda' campaign with links to the White House." (Via Sic Semper Tyrannis.)
posted by homunculus (24 comments total)
Surely this...
posted by pompomtom at 8:00 PM on June 7, 2006

Yeah, I tried to tell people back in like, '99 that Bush was gonna be bad 'cause of the spooky sekrit society ties, but no one listened to crackpot 'ol me. A'course, we ate a lot of freeky drugs back then. I don't blame folks for blowing it off, but just remember... Like a broken clock, sometimes, the acidheads are right.
posted by BeerFilter at 8:03 PM on June 7, 2006

I am fascinated by the Italy-Niger forged documents thing. It's like a novel.
posted by overanxious ducksqueezer at 8:04 PM on June 7, 2006

Lets dress up Iraq as Poland,Then USA dresses up as Germany, and then invades her night and day, for years and years.
posted by hortense at 8:06 PM on June 7, 2006 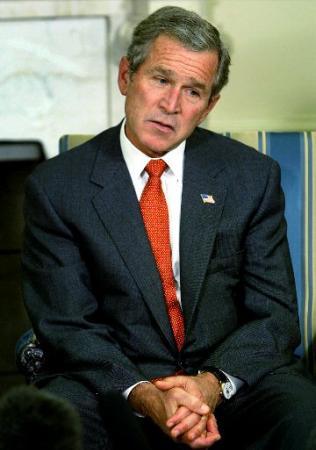 When Bush's time comes he won't merely go to Hell, he will descend all the way to the ninth circle, reserved for those who commit fraud and treachery against those who should be able to trust them. He won't get all the way to the inner part of the circle to be with his Lord Satan, but will watch longingly from the outer part of the circle with Antenor and other politicians who betrayed their citizens.
posted by caddis at 8:24 PM on June 7, 2006

Much as I am a Bush hater, this story doesn't really add anything, nor does it have a smoking gun. Just speculation on the part of the now-usual (and probably right) cast of characters and ninety-nine denials from Michael Ledeen. Let's see what the new Italian government digs up to make Berlusconi look bad.
posted by Ironmouth at 8:26 PM on June 7, 2006

previously
posted by overanxious ducksqueezer at 8:30 PM on June 7, 2006

I've always thought a big part of the Iran-contra scandal was a black ops plan to trash Jimmy Carter. I had forgotten the silly scam of setting up sweet Billy boy.

Part of Ollie North's nasty deal, I’ve read, was getting the Iranians to hold the embassy hostages past the election so Carter would look bad and not be re-elected. Who knows?

Regardless of what is really true, this Vanity Fair story at least begs the question: What would neocons do to gain and hold power? Anything, seems the answer.

Ledeen props his feet up on his desk next to an icon of villainy—a mask of Darth Vader. "I'm tired of being described as someone who likes Fascism and is a warmonger," he says.

Not this particular story Ironmouth. But the details start to mount up.
Rocco Martino?
Antonio Nucera?
(Not to mention the knuckleheads on our side)

And the Italian government - and Berlusconi - is more than a little pissed the U.S. isn't doing jack in helping with an investigation into the killing of one of their Major Generals.
(Nicola Calipari) It's not that they shot at a lefty Italian journalist.
Major General - that's "one of the boys" even if he's not well liked. Berlusconi and his opponants have supported their governments full committment to the ongoing investigation into Calipari's death.

So, I'm with you that even though the IAEA has the forged documents, they don't have a film showing George Bush ordering some schmuck to forge them, the schmuck forging them, planting them, etc. etc.

But you've got interviews from former intelligence and military analysts who have served in the C.I.A., the State Department, the Defense Intelligence Agency (D.I.A.), and the Pentagon - and their names going on record. Opinons or not, that's heavy.

It's well researched and doesn't draw any conclusions. It mostly raises pointed questions. Unger puts together a lot of what has already been reported.

It's hard to follow, and no, it's not proof, but it's not just speculation.

He doesn't assert, for example, why Porter Goss split.
It isn't the "two masters thing." Good point, but that implies some sort of integrity or vulnerability to pressure.

No, if I was Goss (and I'm not) I'd cash out just for knowing as much as he knows politically.
It's not good to know more than your influence, power (or paygrade) can back and still have your hand in - this principle is as true for servants under a tyrant as it is for mafioso.

But the real question is: how to bring them to justice?


"What would neocons do to gain and hold power? Anything, seems the answer."

When I'm feeling Harlan Ellisonish, I like to speculate whether someone would use nuclear weapons on their own country.
Or threaten to.


Oh, but wait! At this moment NBC is running yet another episode of their nastily tittilating reality ratings-grabber Who Wants to be an Online Predator, I mean Dateline. Look everybody! Pervs! Actual pervs nabbed on TV! One after another! Never mind that foreign Iraq stuff, nobody understands that and anyway Saddam attacked us on nine-eleven (did so!) and the President is taking care of it. Actual pervs on TV! Feel a shiver of delicious revulsion go up your back as you see yet another parade of online pervs! That's real journalism!
posted by George_Spiggott at 9:58 PM on June 7, 2006

But the real question is: how to bring them to justice?

Well, leaks from whistleblowers just became a less likely source of help. Thanks, SCOTUS.
posted by homunculus at 10:17 PM on June 7, 2006

When I'm feeling Harlan Ellisonish, I like to speculate whether someone would use nuclear weapons on their own country.
Or threaten to.


Well, the person would have to be a crazy ass religious wingnut with a messiah complex and a deep sense of entitlement and emotional immaturity coupled with an easily provoked temper and....

From homunculus's (in-thread) link: "The president believes the talking points he's given and repeats on progress in Iraq," a Bush administration national security official told me. Bush redoubles his efforts, projects his firmness, in the conviction that the critics lack his deeper understanding of Iraq that allows him to see through the fog of war to the Green Zone as a city on a hill.

MSNBC is reporting that Abu Musab al-Zarqawi has been killed. No link yet.