A Master Watchmaker's Notebook. Fascinating, all of it.
posted by five fresh fish (27 comments total) 3 users marked this as a favorite
This is really cool....
posted by brundlefly at 12:32 PM on February 20, 2006

It is better than making A-bombs I suppose.

Wow! Magnifique! And yeah, the photography is stunning. I can't imagine much in there being had for less than 20 grand and likely lots more.
Thanks five fresh fish. Great post.
posted by peacay at 1:18 PM on February 20, 2006

My god of aesthetic and engineering perfection now has a name, and it is 'The Jaeger-LeCoultre Gyrotourbillon' !
posted by bhance at 1:54 PM on February 20, 2006

Yeah, if I tried to take this up, this would be my normal position at the workbench: 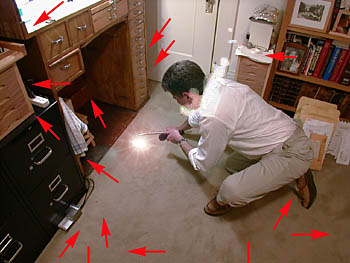 He started noticing the Slip when he was forty - he always remembered, since it was the day after the moon colony tragedy. He'd been making mechanical watches and clocks all his life, though he was one of the very last to do so. It was an artisan and rare business, fed only by collectors , wealthy ludddites and fetishists: but all these types of people were willing to pay handsomely for the quality of work he provided. His family had been clockmakers for generations, but his father and grandmother both agreed he had a special gift, and had surpassed them all. He'd had a quiet and intense focus since he was young; it found its perfect outlet in the precise details and complex aesthetics of the trade.

When he noticed that his watch didn't match match the timestamp on the news feed he was watching in a sidewalk coffeeshop, his first thought was how embarassing it would be for the station to realize they had an an inaccurate time feed. On the walk home, though, all the other clocks disagreed equally with his, so he assumed his newest creation had an error. Every other mechanical clock he had at home agreed perfectly with his watch, and so did every clock that he tried to make true: more and more for the rest of his life.

In those days, the spring in the step of humanity was winding down. The coils and gears of innovation and history still ticked and clacked; the chaotic pendulum of politics still swung; new musics and fuel sources exploded and pulsed as they always had - yet all was seeming a little slower each generation: even as everything sped up. New inventions packed more possibility into a minute of daily life than could possibly be used or lived, so not much more got done in a minute than in the one before. Without that continuous improvement and density of experience, what was the justification for all the acceleration and stress of Modern First World Life? This concern was likely to have negative influence on the Consumer Exuberence Index, so it was largely ignored. Yet how to keep that derivative steep and positive, when dx could get no smaller?

Minutes and hours days started to take longer, so more could be done in them. Once he tracked one of these changes down, where a tiny offset had been added to alternate leap years, to balance some long term precession of the moon. An innocuous and possibly even valid correction - but a steady and unbalanced one, which over time was slowlymaking things slower. Since all the systems of newscasts and timeservers were in agreement, nothing was out of synchronicity - except the little wonderland of ticking levers and springs on his wrist and in his pine-smelling workshop.

Over the years he acculated a full studio of these clocks - unsellable because of their consistent inaccuracy. No one saw - as he did - how preposterous that a clock should "run up", growing faster and faster over the years. Would it be harder to accept that the world's time was running down than to imagine his clocks were accelerating perpetual motions machines? He could see why no one listened to him, and he wasn't really the argumentative type anyway. He built beautiful inaccuracies and baroque inefficiencies into his work, so it would give the "correct" time. He sat in his studio of "inaccurate" clocks ticking in perfect unison, and walked outside into a world with a free ten minutes added into every hour, admiring the newest efficiency measures and timesaving systems built into the newest transit line and personal electronics.
posted by freebird at 2:10 PM on February 20, 2006 [3 favorites]

If you're really interested in watches, the Lititz Watch Technicum will teach you how to repair fine Swiss watches. Tuition free.

For those who a Rolex is just not good enough...